The Stranger Newspaper is on #KshamaSquad!

We’re extremely proud to receive The Stranger’s endorsement for our socialist re-election campaign! This is the third time "Seattle's only newspaper" has supported Kshama Sawant for City Council, as an unapologetic fighter for working people.

As we’ve said since day one of this campaign, what’s at stake in this year’s election is who runs Seattle -- Amazon and big business, or working people. It’s no secret that Kshama is the only candidate in District 3 prepared to stand up to Amazon and the Chamber of Commerce, or who’s campaigning for bold solutions like rent control and a Green New Deal.

In The Stranger’s endorsement, they acknowledge the central role Kshama has played on the Council since her first  election in 2013: “Sawant's pressure continues to make legislation and budgets more progressive. If she's not in there calling out the bullshit and being ‘100 percent that bitch,’ then Seattle will just regress to patting itself on the back for hating Donald Trump while people continue to die in the streets. Fuck that. Vote Sawant.” 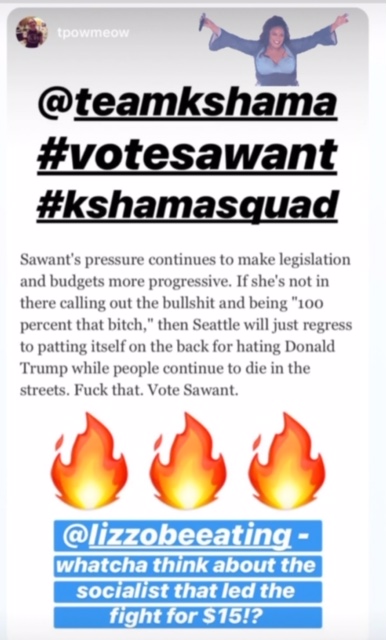 Ballots were sent out from King County elections today and will begin arriving in mailboxes starting tomorrow. Vote early to make sure your vote counts! As The Stranger said, “Amazon and friends are now out for revenge, opening their political cash spigots in an attempt to manipulate public opinion ahead of the August 6 primary election so that a bunch of business-boot-licking candidates will be installed in the seven council seats currently up for grabs.” We can’t let Corporate PACs, Amazon and Vulcan buy this election!

Can you donate $15 dollars today to help us cancel out Vulcan’s $80K Corporate PAC spending?

And don’t forget to join us this Saturday, July 20, to Rally for Rent Control at 6pm at All Pilgrims Christian Church, 500 Broadway E, and RSVP here! If big business thinks they’re going to buy this election, let’s show them that we’re ready to fight for what working people in Seattle really need! #RentControl #TaxTheRich #GreenNewDeal