Sawant and Teachers Union: United to Fight for Public Education 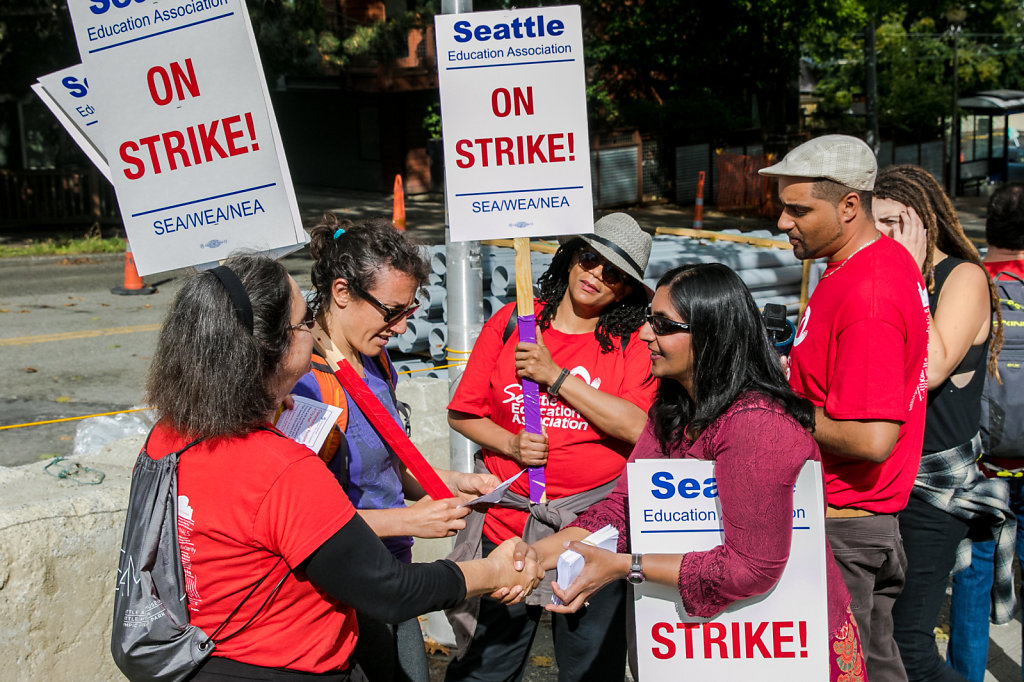 Teachers unions are at the forefront of struggle for quality education and workers rights.Teachers strikes in recent years have reinvigorated the labor movement. We need to stand with teachers defending public education in Seattle and nationally.

We are proud to now be endorsed by the Seattle Education Association! This joins the growing list of 14 unions who have endorsed Kshama, representing over 80,000 workers in Washington state. The recent increase in labor struggles and the growth of the socialist movement are desperately needed in the face of corporate and right-wing attacks on our living standards.

Fully-funded quality public education is a central part of the wider struggle for equality. We need to tax big business and the rich to fully fund our schools while standing up against the corporate “reform,” union-busting and privatization agenda.

Teachers and students also need to be able to afford to live in the city where they work and learn. This is one reason why our fight for rent control and affordable housing is so urgent. A massive increase in quality social housing, like public education, should be paid for by taxes on the big corporations and the super rich.

Matt Maley, District 3 resident and educator at Nova High School, located in the heart of Seattle’s Central District represented by Sawant said: “When students walked out against staff cuts at NOVA high school at the start of this school year, Kshama opened the doors of City Hall for them and put resources into supporting them, while most politicians and School Board members simply gave lip service to our students. Even though the district forced through the cuts at that time, in the wake of this important struggle Kshama’s office helped win $100,000 for an LGBTQ+ health center at NOVA through the People’s Budget. This is just one of countless examples of the crucial role Kshama has played in fighting for educators, students and public education.”

The struggle for equality in our public schools is necessary now more than ever. The Seattle Public School Board recently decided to end its partnership with the Urban Native Education Alliance, cutting a vital program for Indigenous students that has contributed to a major increase in graduation rates. This points in the wrong direction, and Kshama is proud to stand with indigenous leaders, community groups, teachers and students who are fighting against this injustice as part of a wider fight to make quality education truly accessible, providing for all students.

Jesse Hagopian, the Seattle teacher who led the way in creating ethnic studies programs across the city said, “There are a lot of politicians who make empty platitudes about the youth being the future. There are very few who actually fight to defend public education so that the future of our youth can be bright. We live in a city with unimaginable wealth at time of unprecedented growth and a booming economy. And yet we have hundreds of homeless students in the Seattle Public Schools and a $40 million dollar budget shortfall leading to hundreds of teachers being displaced from their schools. Kshama Sawant has been one of the few politicians who has been a consistent champion for our schools and our educators. Most importantly, she knows that her job is to support educators, students, and parents to rise up to create the fundamental change we need in public education.”

When we stand together and fight, we can win! Still, we are up against powerful forces who want “anybody but Kshama” elected in District 3. Corporate PACs have already amassed over one million dollars to try to buy this election. Stand with teachers and union activists and help us cancel out the PAC by donating today! And save the date for an Educators for Sawant fundraiser & house party on July 14.