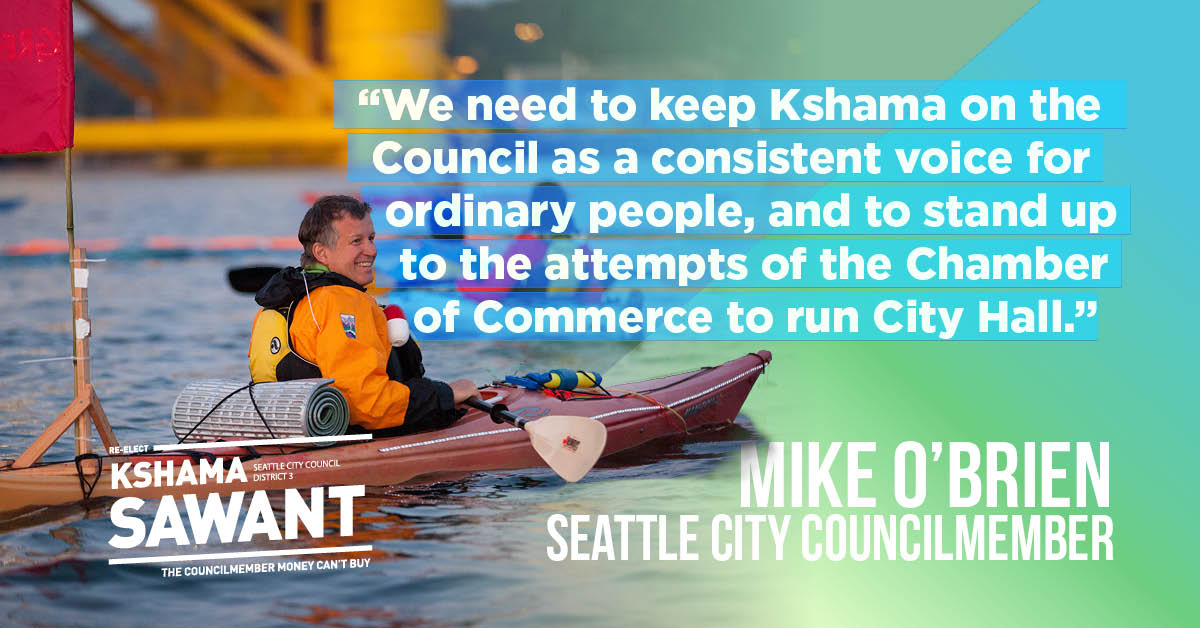 Councilmember O’Brien said: “Councilmember Sawant has pushed Seattle politics in a progressive direction in a way that few have. While I’m not a socialist, and Kshama and I have had our share of disagreements, we’ve worked together on many issues like the $15 minimum wage, the ‘Shell NO!’ campaign against Arctic drilling, on blocking the $160 million North police precinct, and now on the Green New Deal. Kshama is a strong woman of color who stands up to big business. I refute the negative attacks on her attempting to paint her as divisive because of her courageous positions. I find her to always be upfront, principled, and reliable, even if I don’t always agree with her theory of change or criticisms of other elected officials. We need to keep Kshama on the Council as a consistent voice for ordinary people, and to stand up to the attempts of the Chamber of Commerce to run City Hall.”

The stakes this year are higher than they have ever been. Across the city, pro-corporate candidates made it through the primaries in every district, backed by an unprecedented $1.7 million in corporate PAC money which aims to flip City Council to the right and roll back many of the progressive victories we’ve won over the years.

Now more than ever, working people and progressive candidates need to build a united movement to defeat corporate PAC money and win rent control, a tax on big business to build high quality social housing, and a Green New Deal.

We’re proud to be participating in a joint campaign event on September 15 with Tammy Morales (District 2) and Shaun Scott (District 4), calling for a Green New Deal in Seattle. Like Sawant, both Morales and Scott are facing pro-corporate opponents backed by the same Chamber of Commerce sponsored CASE PAC, though the PAC has spent the most for Egan Orion, our opponent in District 3.