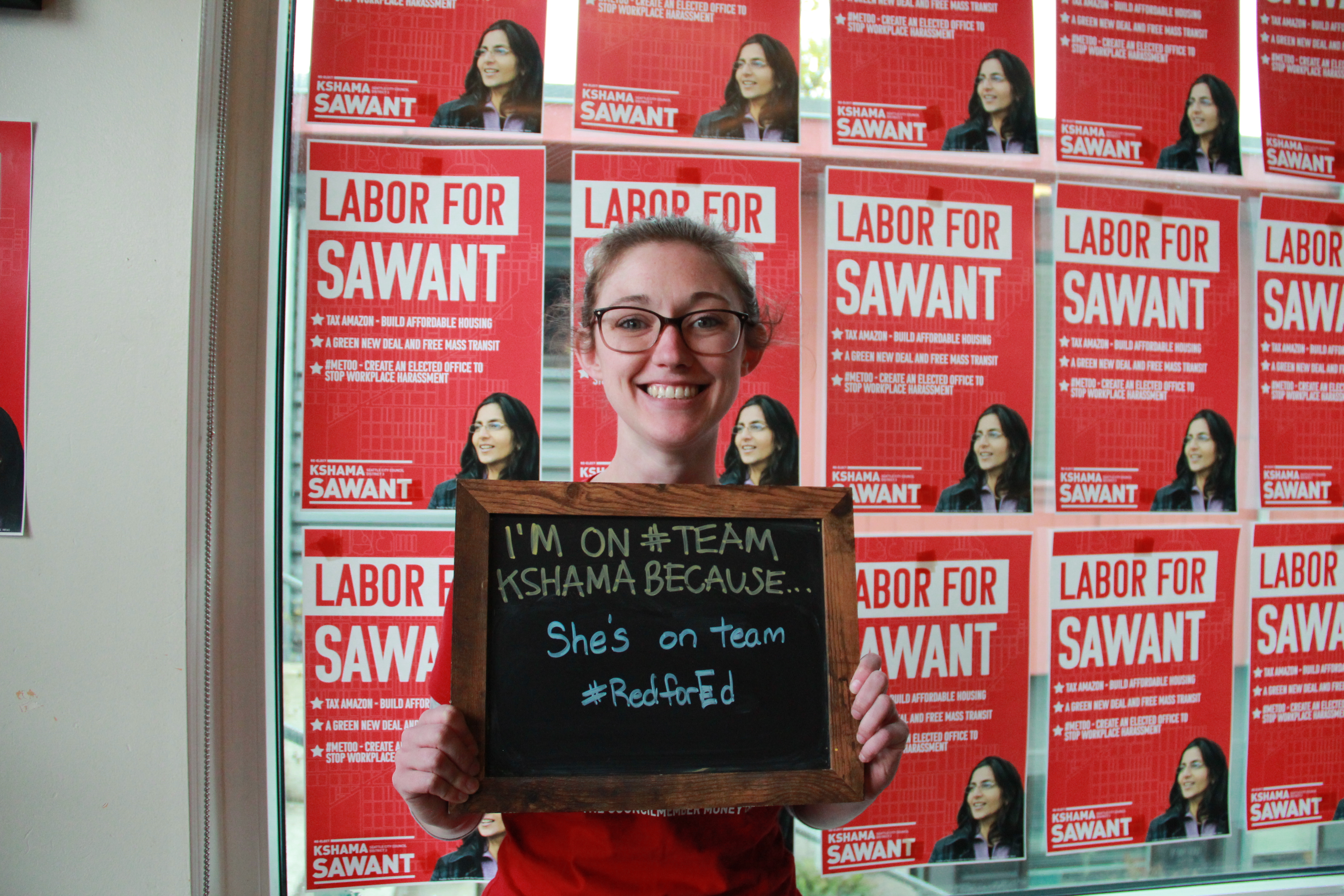 Kshama Sawant, a rank-and-file member of AFT1789, has been one of the most consistent fighters for working people and unions to ever sit on the Seattle City Council. Over 50 union members came out to Sunday’s Labor for Sawant rally, where we heard exciting news — three more unions have endorsed our re-election campaign!

We’re proud to announce that WFSE 1488, WFSE 3488, and APWU Local 28 have joined the Operating Engineers Local 609 and the National Women’s Political Caucus on #TeamKshama. Leaders from these locals explained how Kshama Sawant represents a fundamentally different approach from most politicians, and why their union locals are endorsing her this year.

Join labor in the fight to re-elect Kshama Sawant! Sign up to donate $15/month until election day.

David Yao, Vice President of the Greater Seattle Area Postal Workers Union (APWU), explained why their union unanimously voted to endorse Kshama Sawant: “I’m really happy that there is someone on our City Council who is not willing to go along to get along, who is willing to build a real movement for affordable housing.” District 3 is currently a “post-office desert,” meaning there is hardly a public service post office for residents to use, only private companies. After hearing from community members and post office union members, Councilmember Kshama Sawant has been organizing alongside the APWU to bring a public post office back to D3. Please join #TeamKshama and Councilmember Sawant on May 2 for a community speakout to win back a Central District post office.

Paula Lukaszek, President of WFSE 1488, spoke about why the issues that Kshama is fighting for, like making Seattle affordable to everyone, are key issues for labor: “Rent control is really important to most of my members. We keep getting kicked out of Seattle and we can’t afford to live here. We really support this initiative and labor needs to support Kshama Sawant.”Representing 2,000 workers from dozens of occupational categories, Local 1488 of the Washington Federation of State Employees (AFSCME Council 28) has the third largest membership amongst campus unions at the University of Washington. During our historic struggle for 15 Now, WFSE 1488 set a powerful example of how to fight unapologetically for workers’ rights, joining the struggle early and donating $20,000 to the movement.

John Frazier, President of WFSE 3488 at Harborview Medical Center, said: “I have been in Seattle for some time now, and I have never met someone who will stand with you like Councilmember Kshama Sawant.” Kshama was proud to stand in solidarity with laundry workers represented by WFSE 3488 during their courageous strike against the UW administration last winter.

Matt Maley, a teacher and member of the Seattle Educators Association, explained: “When NOVA was facing cuts, it was Councilmember Kshama Sawant’s office which helped students organize a walkout and gave them space in City Hall. But even more importantly than all the individual labor actions that Kshama Sawant and Socialist Alternative have helped with is her approach. Building movements of working people is what differentiates her from the rest of the council.”

Annelie Day, a member of UFCW Local 21, talked about the importance of re-electing a consistent fighter for working people as we’re seeing a wave of revolt nationwide, including the historic Stop and Shop strike that her union sisters and brothers are leading in New England: “We need people in office who will walk picket lines with us and do more than just give lip service. Kshama Sawant is one of the most consistent fighters for working people and unions to ever sit on the council.”

David Parsons, President of UAW 4121, spoke about how it will take thousands of people getting organized in order to defeat the corporate political establishment and re-elect Kshama Sawant: “The reason I think that Kshama Sawant is going to win is not because of Kshama, but because of all of us...she challenges us to do what we do best, organize.”

As Kshama explained, while big business and the corporate media will try to smear our record, standing fully on the side of working people also means standing up to their bosses: “We’re not being divisive, sisters and brothers. Capitalism is creating these divisions. We need to go to the doors over the next six months to remind people: this is not about bringing big business to the table — big business owns the table! This is about fighting for our rights. If we were ineffective, as the corporate media likes to say, why would big business go to such great lengths to get us out of office.

News just broke that Amazon poured $200,000 into the Chamber of Commerce’s corporate PAC, CASE. We can’t let big business buy this election. As always, Kshama Sawant is not for sale and only accepts the average wage of worker in District 3, donating the rest of the $130,000/year City Council pays themselves towards supporting social movements and workplace struggles. Please join labor in the fight to re-elect Kshama Sawant: sign up to donate $15/month until election day, or chip in a one time donation.